Survey of RE Developers: Housing Supply Will Be Adequate, Office Rental Prices Will Remain Similar, and Construction of Rental Houses Will Begin

According to the results of a survey conducted by members of the Lithuanian Real Estate Development Association shows that half of the RE developers’ expectations were not met, while one-tenth of the developers’ expectations were exceeded last year. It revealed that market participants anticipate a rise in housing prices this year, a part of developers intend to undertake projects related to house renting, while tenants should not provide the managers with big surprises.

Developers Intend to Enter the Market for Long-Term Rentals

In the housing market, which set new transaction records last year, no significant changes are anticipated this year. Just a third of respondents expect higher sales than last year; however, the majority (64%) believes that new housing sales will remain steady.

Despite the fact that the pandemic has increased interest in more spacious housing and suburban homes or homesteads, the most popular housing category should not change this year – according to the majority of real estate developers (60.7%), the area of the most popular houses on the sales market this year will be 32-50 m2; however, 29% claim that larger apartments of 50-70 m2 will be more popular with detached and semi-detached houses larger than 90 m2 falling behind.

“The survey also revealed the market shift toward a new type of property – rental housing. Up to 43% of respondents plan to undertake projects for long-term rent in the next two years. Until recently, it appeared that this business area had no future because the majority of the rental market was in the shadow and the legal business could not compete with it. Furthermore, in the event of a possible supply contraction, some buyers who are unable to find suitable housing for purchase may turn to the rental market. This area has become of interest to developers as income and tenant requirements have increased. It is no secret that investment funds are interested in this as well,” said the President of LNTPA Mindaugas Statulevičius.

According to him, the eight developers who took part in the survey also considered co-living projects, and four had plans in the area of retirement homes.

There Should Be Ample Supply and Prices Are Likely to Rise

Based on recent sales statistics for new homes, some market participants predicted a shortage of this year’s supply at the beginning of the year. However, two thirds of the surveyed RE developers at LNTPA believe that business will be able to provide enough new homes to meet the rising demand. 14% believe that only larger apartments or homes will be in short supply.

This year, nearly half of the respondents (46%) intend to develop the same number of apartments (in units) as last year, with a 38% increase. The vast majority (71%) indicated that the average area of developed housing will remain unchanged; however, a quarter intends to increase the average housing area. 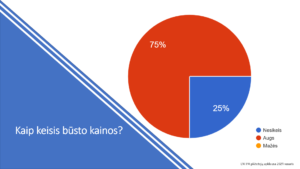 “There are several main reasons to anticipate a price increase: economic stimulation, income growth and the savings accumulated during the pandemic provide an excellent opportunity for a part of the population to improve their living conditions. This coincides with the implementation of energy requirements for new buildings as of 2021, which raises the cost of construction. Labour costs will also rise as a result of border closures and a lack of labour force from Ukraine and Belarus. One of the most important factors is the scarcity of land plots, which would be suitable for development,” told M. Statulevičius.

Rental Office Prices Are Expected to Be Similar

Sandra Jovaišaitė, a partner of “Colliers International” and Head of Mediation Department in Lithuania, stated this week at the RE conference “PreCore” that there are indications showing that a part of tenants could reduce the number of their workplaces by 30%.

“We see that companies are delaying decisions, but we may also see a new demand for approximately 30% smaller areas. It equates to 70 workplaces for a hundred employees,” she explained.

According to the survey results, slightly more than a third of developers’ expectations were met by the end of 2020, while half of respondents had higher expectations. The survey was conducted between the 21st of January and the 5th of February. It was filled in by 30 RE company managers or development managers.

Club 4: what is the potential of co-living projects?

LNTPA: let’s check the temperature of the RE market